Week One: We Survived!

I’m happy to report that we’ve made it through the first official week of homeschooling! Here is a photo of the munchkins enjoying their “first day of school” supply bins that awaited them on the kitchen table the first day: 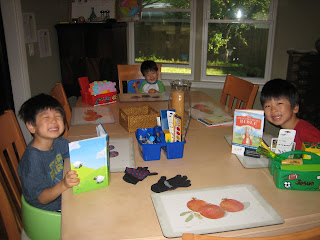 It hasn’t been ideal timing-wise, with DH out of the country last week (he arrived on Sunday and then we were set to start on Monday!)…I’ve been up late each night past 2 a.m. and am exhausted…but nonetheless, we began!

Our kids were excited from the get-go. They burst into our room around 7 on Monday morning and announced with great excitement, “It’s the first day of school!” The schedule is still a work in progress, but generally speaking, we do something like this:

The math and language arts are mostly for my eldest, Harry, (DS, 7 yrs old) although I try to fit in more informal time with brother Ron (DS, 4 yrs, old) as well. I include all the boys when we do Adventures in My Father’s World for our basis in Bible/History/Geography/Science; otherwise, with Harry we have started using Singapore Math 1A and a combination of Classical Writing Primer, First Language Lessons, New American Cursive, and Spelling by Sound and Structure for our Language Arts time. More specifically, this week we learned about the Vikings, a topic I haven’t thought about for decades if at all, as well as having fun with learning about the origins of the kids’ names and doing our first science experiment (“Yes, eggs float in salty water!!”)

Not that it’s all been smooth sailing…I find it stressful to manage several different needs at once, particularly when I’m trying to balance teaching Harry with handling an urgent issue from one of the other brothers. I also sometimes find it hard to relax the schedule, such as when a topic takes more time than I expected or when I feel the weight of trying to get through a particular assignment I had planned for the day. I keep trying to tell myself to be flexible with the schedule and hopefully I’ll be able to take my own advice!

The things I find enjoyable: I like learning alongside my kids, although I wish I had more time to be prepared to a deeper extent, particular in the area I consider my weakest subject, which would be history. I would love to spend the time to read everything I can on a subject before I introduce it, but it doesn’t usually work out that way. Still, I have a feeling that the person who will end up learning the most in the end will be me! And that’s not a bad thing…hopefully the kids are learning something as well!

Another thing I’ve discovered is that homeschooling makes the day FLY by. We are constantly busy and it doesn’t feel like any time is wasted! And yet, I still think I can say that we’ve begun to achieve one of our goals for doing this switch in the first place, which was to be done with school earlier than Harry’s peers, leaving more time for play and resulting in a more relaxed pace. Although it’s still a little early to say this for certain, and there is definitely a modicum of stress for me throughout the day, I’m hopeful that by the end of the year we will be able to say that homeschooling has resulted in our year being much more relaxing than our previous year. It’s wonderful for Harry that he is usually done with schoolwork by 2 p.m.!

I do think Harry misses his friends from school somewhat, and we were hoping to catch them on the playground one day this week, but by the time we arrived after Dobby’s nap, everyone had already left the school playground except for one friend. But at least Harry had the chance to talk with that one friend and make general plans to have a playdate one day. I will have to work hard to make sure he continues those social connections, because I would like him to not feel too separated from his school friends if at all possible.

We school for four days of the week, then Harry will start his Friday co-op classes in drawing, gym and computers on Sept. 4th. So this Friday, we made it a fun day–a day to go and do activities that we normally wouldn’t during school. DH took Harry and Ron to the local par 3 golf course, which has become one of their favorite activities this summer, then I took them to another of their favorite jaunts, Chuck E. Cheese. We continued our weekend of fun with a trip to Sugar Grove, IL, to see the U.S. women take on the Europeans at the Solheim Cup. We tried in vain to get near the pairing of Michelle Wie and Christina Kim (fellow Korean-Americans! see below) but the crowds were just too much–but then their golf cart drove right by us twice through the course of the rest of the afternoon, and that was a big bonus for the boys who were getting very patriotic with their “U.S.A.” cheers.

Lastly, this week I was able to get some confirmation that our efforts at home haven’t been in vain; we have been working on math this summer, trying to solidify Harry’s basic math facts, and on his latest drill, he was able to hit perfect 100 %s on all of his exercises, which was a first for him. The practice is paying off, and I’m extremely encouraged by that.

So now it’s on to week 2. We will be covering Christopher Columbus and begin our study of the names of Jesus, in addition to math (subtraction facts), spelling, handwriting (more cursive!), and the beginning of Latin! Should all be very very interesting!

Another great quote: "We are all related to our Creator, to one another, to creation...If my theology doesn't help me to be a better relative, I need a new theology." @Lenorets #twgnconf #missioalliance

Amazing reflections from @Lenorets Lenore Three Stars at @missioalliance's The Whole Good News conference today. "Indigenous people have held a theology of the land in a way that most Americans do not. There is no taking without giving back." #twgnconf #missioalliance pic.twitter.com/TMpRidpx6v

@esaumccaulley What I want to know is, is this a commutative principle??? 🤣

Sadly, Korean American churches aren’t immune to stories of spiritual/sexual abuses of power. This story is so disturbing and tragic. I pray for all those who have suffered at the hands of the abusers and for all those who attended or left CFC and who are struggling w/ this news. twitter.com/wbez/status/14…

Doing a final listen through @imTerenceLester's @EveryVoiceNow interview to launch season 2! Check out previous episodes and subscribe anywhere you get your podcasts so you won't miss a moment. Drops on Monday! 🎙️🎙️🎙️🥳🥳🥳everyvoicenow.com @ivpress pic.twitter.com/dIy4TQtAcb