Posted by Helen on Wednesday, September 9, 2009 · Leave a Comment

So just to cement the idea that my family is golf-crazy…I just needed to post some photos from our special outing today to the BMW Championship which is being held at a golf course in the Chicagoland area this week. As I mentioned last post, this week is a “light week”, so it was no problem for us to take off in the middle of the week to do something like this! (I love the flexibility of homeschooling!)

Today was the last practice round of the tournament, and I thought our chance of seeing Tiger Woods would be higher if we went in the morning as he typically plays his practice rounds early versus late. I wasn’t sure I could handle all three boys by myself, especially our youngest, who is prone to screaming when he doesn’t get his way (and a screaming toddler is not exactly a welcome addition on a golf course!) But I decided, we’ll give it a try, and the worst case scenario is that we don’t see anything and we come back home early. I prepped the older boys accordingly, so that their expectations would remain in check, but all they wanted to do was to see Tiger despite everything I said. 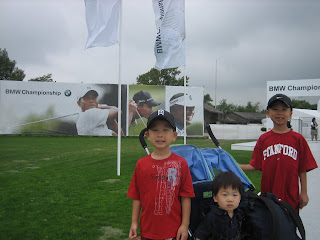 We arrived at Cog Hill golf course a little after 9 a.m., and the parking lot was already full! We had to park at the far end of the lot and started the long trek to the tournament site, a good 200 yards away. I was able to bring in my backpack due to it being full of kid necessities (water cups, diaper changing supplies, etc.) and we entered the gates, greeted by a huge sign featuring Woods, Camilo Villegas, and Vijay Singh. We were wanting to find Tiger Woods immediately, but then we noticed a small crowd gathering around the 10th green. We waited with the crowd and discovered that none other than Spanish golfing star Sergio Garcia was about to come to the 10th tee and hit.

Right after he teed off, he came right over to the boys and offered to sign autographs. I had luckily grabbed some Sharpies and some Post-It Note pads right before I left the house, and had armed the boys with them while they were waiting for Sergio to hit. They came in handy! 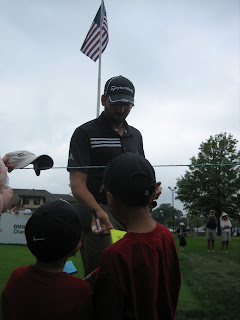 Then we were off to find Tiger. I was hoping against hope that the boys would be able to just get a quick glimpse of him somehow, but also trying to be realistic that it might not happen. We kept asking course marshals along the way, “Where is Tiger” Some didn’t know, but then one person with a walkie-talkie asked around for us and told us to head for the 14th green. I put our 4 year old in the double stroller along with our toddler, and then my 7 year old and I ran as fast as we could through the course to reach the 14th green. Soon, we were at an intersection of the course where you could see parts of the 14th-17th holes, and it was here we discovered the playing group just ahead of Tiger’s, featuring Korean golfer Y.E. Yang, the recent Tiger-defeater and winner of the 2009 PGA Championship. He also stopped to sign autographs for the boys, which we appreciated. Tiger’s group came next, and the boys were able to get wonderful views of Tiger from pretty close range. He did not, unfortunately, stop to sign autographs, but we did get some good photos of him passing by. 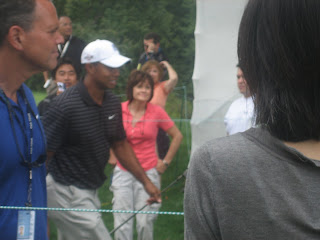 We saw a number of other pros, but our toddler was at the end of his small little rope so we headed home after about two hours on the course. But we were able to create many amazing memories in that short span of time and I’m pretty sure this will become an annual tradition for us! Again, this is something that homeschooling makes easier to do, and I’m glad we had the flexibility and freedom to go and hang out with Tiger and the other PGA tour players for a morning!

And as an aside, I let my 7 yr. old son watch Obama’s speech to children on Tuesday morning. One thing he said was, “Obama was homeschooled!” in reference to Obama’s description of the time when he lived in Indonesia and his mom woke him up at 4:30 every morning to do schoolwork with him because they couldn’t afford the local school for English speakers. Whatever your political persuasion, if the sitting president of the U.S. can speak positively about the educational experience that he had at home with his mother, that can only help us all in our own efforts with our kids!

Another great quote: "We are all related to our Creator, to one another, to creation...If my theology doesn't help me to be a better relative, I need a new theology." @Lenorets #twgnconf #missioalliance

Amazing reflections from @Lenorets Lenore Three Stars at @missioalliance's The Whole Good News conference today. "Indigenous people have held a theology of the land in a way that most Americans do not. There is no taking without giving back." #twgnconf #missioalliance pic.twitter.com/TMpRidpx6v

@esaumccaulley What I want to know is, is this a commutative principle??? 🤣

Sadly, Korean American churches aren’t immune to stories of spiritual/sexual abuses of power. This story is so disturbing and tragic. I pray for all those who have suffered at the hands of the abusers and for all those who attended or left CFC and who are struggling w/ this news. twitter.com/wbez/status/14…

Doing a final listen through @imTerenceLester's @EveryVoiceNow interview to launch season 2! Check out previous episodes and subscribe anywhere you get your podcasts so you won't miss a moment. Drops on Monday! 🎙️🎙️🎙️🥳🥳🥳everyvoicenow.com @ivpress pic.twitter.com/dIy4TQtAcb